So I read a bit about this wine through folks who had reviewed it on CellarTracker - a service I subscribe to for keeping track of my wine collection.  Only one person (out of four) enjoyed the wine, and that was back in 2009, the rest dissed the wine as having a "manure/barnyard factor" (2010), or "herbaceous - tar" (2005); those who drank it in 2009 were split: one liked it very much that other guy said his wife liked it better than he did.    So I opened this bottle with some trepidation, but keeping in mind it was South African wine - a country known for quite a bit of stink in their reds especially, in the past I have likened it to road tar ... but I have also found that given a healthy amount of time that nuance can dissipate and become more of a asset instead of a detriment.  The first problem I had was not in the nose or taste, it was the cork, which decided it did not want to budge - I ended up getting half the cork out and drilling a hole down the middle to pour the wine out - I then had to get the bottle pouring and then put my glass under it (like a constantly running fountain) to avoid getting to many cork pieces in my glass.  As for the wine itself: the nose was earth based with lots of forest floor and mushroom notes ... there was a hint of smoky-tar but nothing too off-putting as it would have been when it was young.  The palate had a definite aged flavour, mostly teriary notes, definitely no fresh fruit - I don't think I found any dried fruit either.  Earthy and coffee flavours dominated, but it was fairly smooth, still showed good acidity with just enough tannin grip to keep it interesting.  Not sure I agree with three of my CellarTracker co-horts, but then again I knew what I was getting into, if you've never experience that "South Africa Stink" in a bottle of their wine it can be quite off-putting.  By the way, the wine was a blend of 66% Cabernet Sauvignon, 15% Merlot, 10% Malbec and 5% Petit Verdot and Cabernet Franc - so a true Bordeaux blend using all five grapes.

Check out the OntarioWineReview.com website ...catch up with the latest news and reviews from Ontario sign-up for the free biweekly newsletter and much more.

Posted by Michael Pinkus at 9:36 PM 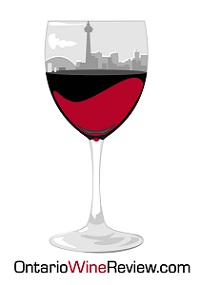 Links to other OntarioWineReview Blogs / Sites

Find out What I'm Drinking Tonight